Chardham Yatra Including Yamunotri, Gangotri, Badrinath and Kedarnath and each temple have own importance in Hindu religion. Yamunotri Temple is situated in the western region of Garhwal Himalayas at an altitude of 3,235 metres (10,614 ft) near the river source.[3] The original temple was built by Maharani Guleria of Jaipur in the 19th century. The current temple is of recent origin as earlier constructions have been destroyed by weather and the elements. There seems to be a confusion as to who built the temple of Yamunotri. However, according to sources, the temple was originally constructed by Maharaja Pratap Shah of Tehri Garhwal.

Gangotri is a town and a Nagar Panchayat (municipality) in Uttarkashi district in the state of Uttarakhand, India. It is a Hindu pilgrim town on the banks of the river Bhagirathi and origin of River Ganges. It is on the Greater Himalayan Range, at a height of 3,100 metres (10,200 ft). According to popular Hindu legend, it was here that Goddess Ganga descended when Lord Shiva released the mighty river from the locks of his hair.
The original Gangotri Temple was built by the Nepalese general Amar Singh Thapa. The river is called Bhagirathi at the source and acquires the name Ganga (the Ganges) from Devprayag onwards where it meets the Alaknanda. The origin of the holy river is at Gaumukh, set in the Gangotri Glacier, and is a 19 km trek from Gangotri. The temple is closed from Diwali day every year and is reopened in May. During this time, the idol of the goddess is kept at Mukhba village, near Harsil. Ritual duties of the temple are supervised by the Semwal family of pujaris. These pujaris hail from Mukhba village.

Badrinath or Badrinarayan Temple is a Hindu temple dedicated to Lord Vishnu which is situated in the town of Badrinath in Uttarakhand, India. The temple is also one of the 108 Divya Desams dedicated to Vishnu, who is worshipped as Badrinath—holy shrines for Vaishnavites. The temple is located in Garhwal hill tracks in Chamoli district along the banks of Alaknanda River at an elevation of 3,133 m (10,279 ft) above the mean sea level. It is one of the most visited pilgrimage centers of India, having recorded 1,060,000 visits.

Kedarnath Mandir  is a Hindu temple (shrine) dedicated to Lord Shiva. Located on the Garhwal Himalayan range near the Mandakini river, Kedarnath is located in the state of Uttarakhand, India. Due to extreme weather conditions, During the winters, the vigraha (deity) from Kedarnath temple is carried down to Ukhimath and where the deity is worshiped for the next six months. Kedarnath is seen as a homogenous form of Lord Shiva, the 'Lord of Kedar Khand', the historical name of the region. This temple is the highest among the 12 Jyotirlingas. Kedarnath was the worst affected area during the 2013 flash floods in North India. The temple complex, surrounding areas, and Kedarnath town suffered extensive damage, but the temple structure did not suffer any "major" damage, apart from a few cracks on one side of the four walls which was caused by the flowing debris from the higher mountains.

Drive to Barkot via Dehradun & Mussoorie. Enroute visit Kempty Fall and others later drive straight to your Hotel

Drive to Jankichatti / Phoolchatti, trek start from here to Yamunotri (6kms). Either by walk or by horse or by Doli at own cost. Arr. Yamunotri, One can cook rice by packing it in a cloth and dipping it in the hot water of the hot kund. Pilgrims take this cooked rice home as "Prasad". Here near the temple "Pooja" can be offered to Divya Shila, After taking bath in Jamunabai Kund's warn water and having "Darshan" of pious "Yamunaji" returning to Jankichatti. Later drive back to Barkot.

Drive to Uttarkashi. Check in Hotel, Later at evening visit Vishwanath Temple . Night Halt. Uttarkashi: Situated at the bank of river Bhagirathi. The temple of Lord Vishwanath is located here where a massive iron trident is erected.

4 Visit: Uttarkashi to Gangotri via Uttarkashi (100kms/3-4 each side)

We proceed to Gangotri (3048 mts), enroute we enjoy picturesque Harsil village, Bhagirathi River and the most magnificent view of the Himalayas . After Gangotri Darshan we return to Uttarkashi.

Morning drive to Gaurikund, Trek start from Gaurikund to Kedarnath (3584 mts) on foot or on by pony / Doli. Tour members should carry personal medicines, heavy woolen, toiletries and clothes for an overnight halt at Kedarnath. Check in Hotel. Later visit KedarnathTemple .

7 Visit: Kedarnath to Guptkashi/Rudraprayag (14Kms Down Trek & 75kms/3hr by Road)

Early morning, after Temple Darshan trek down to Gaurikund. Later, drive to Rudraprayag via Guptkashi. Check in Hotel at Rudraprayag/Guptkashi.

Drive to Badrinath via Joshimath. Check in Hotel. Later at evening visit Badrinath Temple for Aarti.

Early morning, pilgrims after having a bath in the Taptkund have the Darshan of Badrivishal. Brahamakapal is significant for Pinddan Shraddh of ancestors (Pitrus). There are other interesting sight seeing spot like Mana, Vyas Gufa, Maatamoorti, Charanpaduka, Bhimkund and the "Mukh" of the Saraswati River . Just within the three kms of Badrinathjee. Later drive back to Joshimath/Pandukeshwar/Govindghar Check in Hotel. 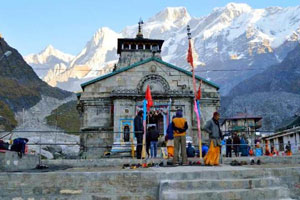