Bhuj was founded by Rao Hamir in 1510 and was made the capital of Kutch by Rao Khengarji I in 1549. Bhuj is home to one of the first Swaminarayan Sampraday temples, built in 1822. Bhuj temple is one of the six original temples built during the earthly presence of the Lord Swaminarayan. The devotees living in Bhuj including Gangaram Mull, Sundarji Suthar and Hirji Suthar requested Lord to construct a temple at Bhuj. Lord instructed Vaishnavanand Swami to construct the temple, and Lord himself installed the murti of Lord NarNarayan Dev in Bhuj on VS 1879 on the 5th day of the bright half of the month of Vaishakh

The old city was surrounded by a fort wall with five major gates (Mahadev, Patvadi, Sarpat, Bhid and Vaniyavad) and one small gate known as Chhathi Bari (sixth window). The fort wall is 35 feet high and four feet thick, and during its use was armed with fifty-one guns. Much of the fort wall has either fallen down or been demolished, due to the damage sustained in the 2001 earthquake and the city's redevelopment.

The Kalo Dungar is also famous for a 400-year-old Dattatreya temple. Legend says that when Dattatreya walked on the earth, he stopped at the Black Hills and found a band of starving jackals. Being a god, he offered them his body to eat and as they ate, his body continually regenerated itself. Because of this, for the last four centuries, the priest at the temple has prepared a batch of prasad, cooked rice, that is fed to the jackals after the evening aarti 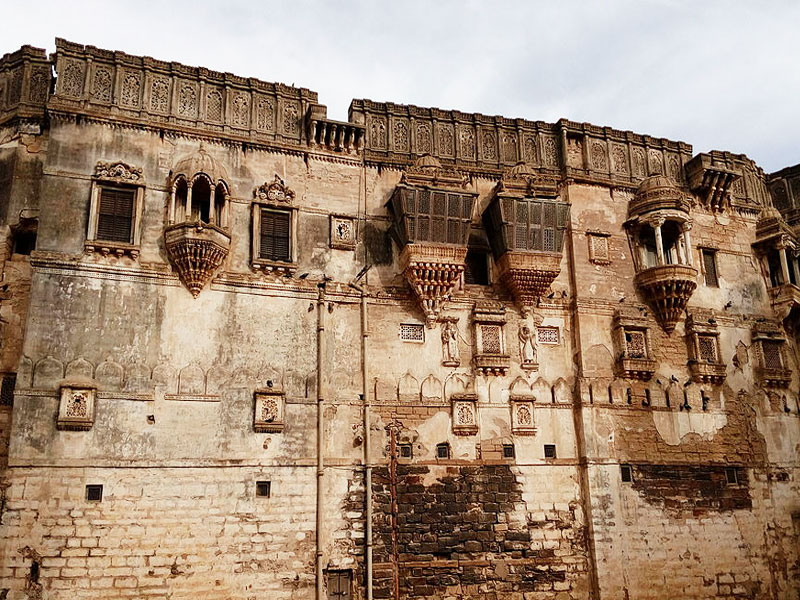 The Aina Mahal is an 18th-century palace that is located next to the Prag Mahal in Darbargadh, Bhuj, Gujarat, India. The palace was built by Rao Lakhpatji of Cutch State around 1750. Lakhpatji's master craftsman Ram Singh Malam designed the palace in the local style and decorated it in the European style with glass, mirrors and tiles. The palace had two floors; the first floor has the Audience Hall, the Pleasure Hall, the Hall of Mirrors and the State Apartments, and the second floor has the ante-chamber, Darbar (Court) Hall and Marriage Hall. The building has been converted into a museum which includes a "europeanerie" collection that includes clocks, wares, mechanical toys, paintings and pictures. 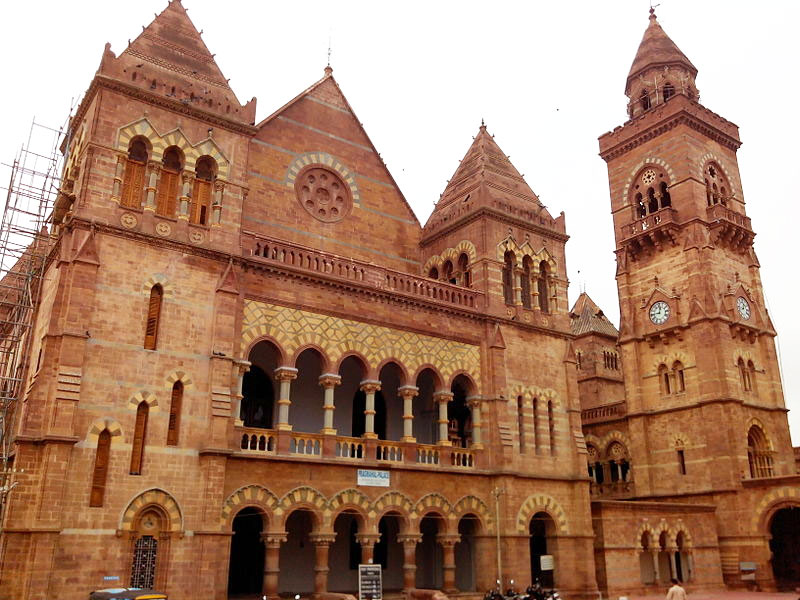 Prag Mahal is named after Rao Pragmalji II, who commissioned it and construction began in 1865. It was designed by Colonel Henry Saint Wilkins in the Italian Gothic style and many Italian artisans were involved in its construction. The palace artisans' wages were paid in gold coins.[4] Construction of the palace, which ultimately cost 3.1 million rupees, was completed in 1879 during the regency of Khengarji III (Pragmalji II's son) following Pragmalji II's death in 1875. The local Kutchi builder community (Mistris of Kutch) were also involved in construction of Prag Mahal along with Colonel Wilkins.[ 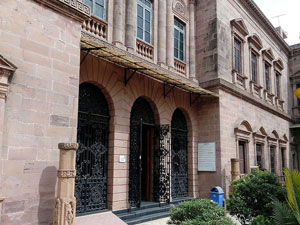 The museum has the largest existing collection of Kshatrapa inscriptions, dating to the 1st century AD. The oldest Kshatrap six inscription-stones found in Andhau village in Khavda are moved here. They are originally on the hillock and called Lashti. They were erected in time of Rudradaman. The only Gujarati Abhir inscription of the 3rd century is also here. It also has examples of the extinct Kutchi script (now the Kutchi language is mostly written in the Gujarati script) and an interesting collection of coins, including the Koris - Kutch's local currency till 1948.

This museum has almost 11 sections. The archeological section has Indus seals. Different kinds of stone tablets are available also. The painting showing the different vocations of Kutch are on the display. There is also an excellent section which covers classical and musical instruments like Nagfani, Morchang and many others, which are put on the display of the museum. 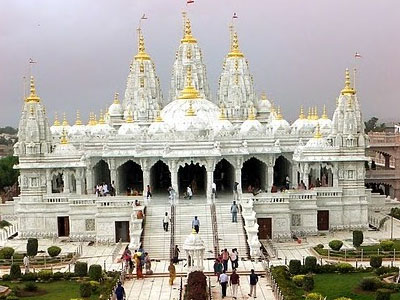 This mandir comes under the Narnarayan Dev Gadi. Senior devotees Gangarambhai jethi Sundarjibhai, Jigneshwarbhai and others from the Bhuj region of Kutch went to Gadhada where God Swaminarayan was attending a Fuldol festival. In that festival, the devotees of Bhuj met Swaminarayan and requested him to construct a temple in Bhuj.

God Swaminarayan asked Vaishnavananand Swami to proceed with a team of the saints to Bhuj and construct a temple. Vaishnavanand Swami and the accompanying saints went to Bhuj in 1822, camped at the place neighbouring the land of temple drew plans of the temple, complex, executed the plans with minute details and within a short span of one year, they built a temple abode of NarNarayan Dev. 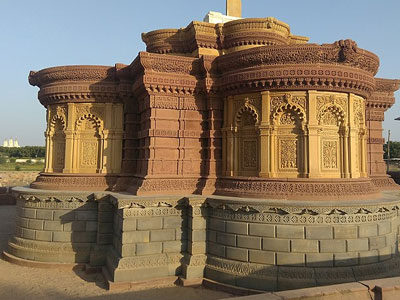 The Chhatardi cenotaphs are made of red sandstone, the most impressive of them being the one built for Rao Lakhaji, who ruled in the 18th century and was pivotal in the develipment of Kutch. At the various cenotaphs within the Chhatardi, memorial stones commemorate the spots where the remains of the individuals were cremated. 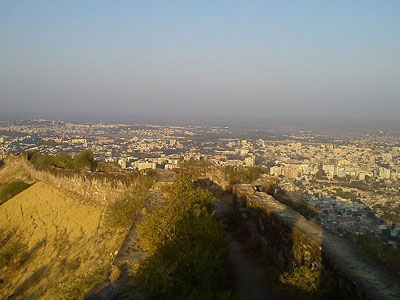 Bhuj was founded by Rao Hamir in 1510 and was made the capital of Kutch by Rao Khengarji I in 1549. Its foundation stone as state capital was formally laid on Vikram Samvat 1604 Maagha 5th (approx. 25 January 1548). From 1590 onwards, when Rao was forced to acknowledge the Mughal supremacy, Bhuj came to be known as Suleiman Nagar amongst Muslims. The city's walls were built by Rao Godji I in 1723 and the Bhujiya Fort by Devkaran Seth in Rao Deshalji I's time (1718 - 1741).

Bhujia hill from Chhatedi Bhuj has been attacked six times. In two instances, the defense was successful and in four other instances, the defense failed. In 1728, an attack by Sarbuland Khan, Mughal Viceroy of Gujarat, was repulsed by Rao Deshalji I, and, in 1765 Mian Ghulam Shah Kalhoro was, by a timely display of the strength of the fortifications, induced to withdraw. During the civil troubles of the reign of the Rao Rayadhan III, Bhuj was thrice taken, by Meghji Seth in 1786, by Hansraj in 1801, and by Fateh Muhammad in 1808. On 26 March 1819, the hill fort of Bhujia was captured by a British detachment under Sir William Keir. 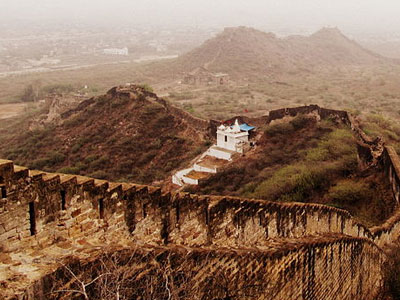 The fort was constructed for the defense of the city by Jadeja Chiefs. The construction of Bhujia fort was started by Rao Godji I (1715–1718) ruler of Kingdom of Kutch as a sort of outwork defense for Bhuj. However, the major work and completion was done during the rule of his son, Deshalji I (1718–1741).

The Fort has seen six major battles since its construction, The first major battle at Bhujia Fort was fought during the early part of the reign of Deshalji I, when Sher Buland Khan, who was Mughal Viceroy of Gujarat at that time, invaded Kutch. The army of Kutch was in a precarious condition, when a group of Naga Bawas got the gate of Bhujia Fort opened through a stratagem on pretext of visiting Nag temple for worship and then joined in the fray against Sher Buland Khan's army, putting them to flight. Since that day Naga Bawa and their leader have had a place of importance in a procession held on Nag Panchami.