In the holy temple of "Arasuri Ambaji", there is no image or statue of goddess the holy "Shree Visa Yantra" is worshiped as the main deity. No one can see the Yantra with naked eye. The photography of the Yantra is prohibited. The Arasuri Ambe Mata or Arbuda Mataji is kuldevi of Barad Parmaras. The one Parmar state is located near the ambaji town I.e.Danta and which also serves as capital of whole parmar clan.

The original seat of Ambaji Mata is on Gabbar hilltop in the town. A large number of devotees visit the temple every year especially on Purnima days. A large mela on Bhadarvi poornima (full moon day) is held. Every Year from all over the country people come here walking all over from their native place just to worship MAA AMBE in September. The whole Ambaji town is lit up as the nation celebrates the festive time of Diwali.

The Ambaji Mata Temple as a Shakti Peeth

The shrine of Shri Amba is regarded as a revered shrine by the Shakta Shaktism sect of Hinduism. It is believed that the Heart of Sati Devi has fallen here. The origin of the Shakti Peetha status temple is from the mythology of Daksha yaga and Sati's self immolation. Shakti Peethas were believed to have been formed when the body parts of the corpse of Sati Devi fell into different regions when Lord Shiva carried her corpse in sorrow after her death. The shrines are considered as highly revered by Shaivist (Shaivism) sect in Hinduism. The Shakti Peethas are mostly worshiped by tantra practitioners.

Ambaji is one of the 51 ancient Shakti Peetha Tirth in India. There are 12 main Shakti Pith Tirth, significant places of pilgrimage for the worship of Shakti, namely, Ma Bhagwati Mahakali Maha Shakti at Ujjain, Ma Kamakshi at Kanchipuram, Mata Bramaramba at Srisailam, Shri Kumarika at Kanyakumari, Mataji Ambaji at AnarGujarat, Mata Mahalaxmidevi at Kolhapur, Devi Lalita at Prayag, Vindhya Vasini at Vindhya, Vishalakshi at Varanasi, Mangalavati at Gaya and Sundari at Bangal & Guhyeshwari Temple in Nepal.

There is no idol or picture in the temple but a simple cave like Gokh in the inner wall, in which A Gold Plated Holy Shakti Visa Shree Yantra having kurma back convex shape and 51 Bij letters therein, connected with that of the original Yantras of Nepal and Ujjain Shakti Piths, is also ritually installed in such a way it can be visible for devotion, but never photographed in past nor can be so done in future. The worship of this Visa Shree Yantra is done only after tying a bandage on the eyes. 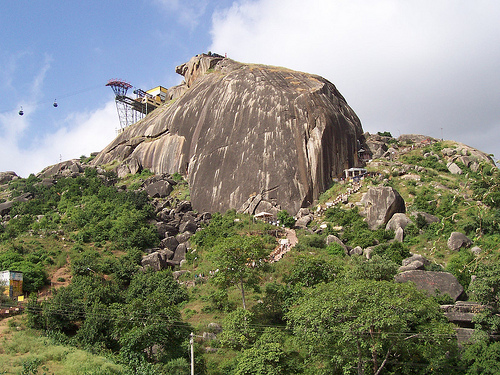 Just about 4. 5 km Gabbar hill is situated on the border of Gujarat and Rajasthan, near the flow of the origin of the Vedic virgin river Sarasvati, on the hills of Arasur in forest, towards south-west side to ancient hills of Arawali, at the altitude of about 480 meters, at about 1,600 feet (490 m) high from sea level, having at 8.33 km2 (3.22 sq mi) area as a whole, and it is, in fact, One of the 51 famous Ancient Shakti Peeths and it is place of where the heart of the dead Devi Sati fell at the top of hill of Gabbar as per the legend narrated in the "Tantra Chudamani". The Mountain or Hill of Gabbar has also a small temple fortified from the western side and there are 999 steps to go up to the mountain and reach this holy temple at the top of Gabbar Hill. A Holy Lamp is constantly burning on this hill temple facing exactly in front of Visa Shree Yantra of Nij Mandir of Mata Shri Arasuri Ambica. Sightseeing places include a sunset point, Cave and Swings of Mataji and Trips through a ropeway. As per recent study Ambaji Temple was constructed by the Suriyavans Emperor Arun Sen, the ruler of Vallabhi in 4th Century A.D

One kilometre away from Ambaji near Kumbharia Jain Temple on Khedbrahma Highway, there is the Kamakshidevi Temple Complex. All 51 Shakti Pith, the centre of cosmic power, are reconstructed and installed in a single complex so as to give total information to the visitors and devotees of the great Shakti Sampraday about the various incarnations of Adhya Shakti Mata.

Kamakshi Mandir places itself in the Kamakshidevi Temple Complex, located 1 km away from Ambaji on Khedbrahma Highway. All the 51 Shakti Peethas and the centre of cosmic power are reconstructed and installed in this complex so as to provide the visitors and devotees with complete information about the great Shakti Sampraday and the various incarnations of Aditya Shaktimata. 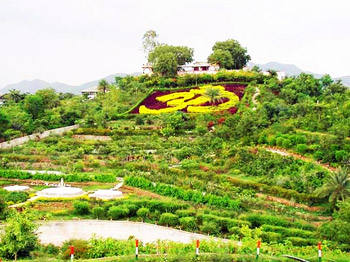 Located atop the Kailash Tekari, the Kailash Hill Sunset is just about 2 kilometres from the Ambaji Mata Temple, along the Khedhbrahma Highway. 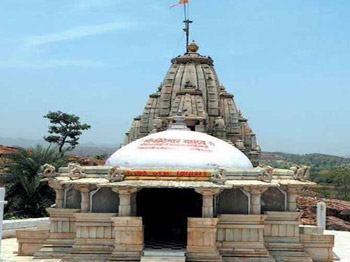 Just 8 km away from Ambaji near the Origin of the Vedic Virgin River Saraswati, there is an ancient temple of Shri Koteshwar Mahadev, attached with a Holy Kund and the flows of river Saraswati from the Mouth of Cow Gaumukh, incurved in a rock. As per a legend there was an Ashram of Rushi Valmiki, the author of Ramayana, near Valmiki Mahadev temple and the King of Mevad, Maha Rana Pratap had renovated this holy temple, It is said that during the Mutiny of Independence in 1857, Nana Saheb Peshwa had taken his abode in the cave of this temple. 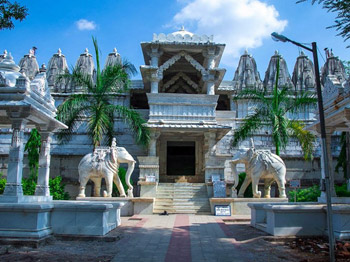 One and a half kilometers away from Ambaji Temple Town. The nearest railway station is the Abu Road about 24 Kilometer and the nearest bus stand 1.5 Kilometer of the Ambaji. It has historical Jain temple of Shri Neminatha Bhagwan which dates back to 13th century. The Kumbhariya Jain temple of Shri Neminatha Bhagwan is now heritage center in Gujarat. The village Kumbhariya also houses educational institute Shree Ambaji Arts College managed by Shree Arasuri Ambaji Mata Devasthan Trust, Ambaji established in 1991 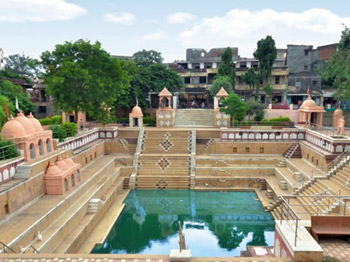 Man Sarovar is behind the main temple. It is said to have been constructed by Shri Tapishanker, a Nager Devotee of Ambaji from Ahmedabad, from 1584 to 1594. There are two temples on two sides of this holy tank, one is of Mahadev and another is Ajay Devi, who is believed to be the sister of Mata Ambaji. The visitors and devotees use to take holy bath in this Man Sarovar. It is also an important source of history of Ambaji that there is an ancient Monument of Scripts Writings and Old Carvings on Rock Stone "Shilalekh" of Raja Maldev, dated Hindu Calendar Samvat year 1415, in Ajay Devi Mandir. The Temple Trust has also undertaken the renovation projects in respect of Holy Man Sarovar, and its temples and surroundings, behind the main Temple.