Girnar, also known as Girinagar ('city-on-the-hill') or RevatakParvata, is a group of mountains in the Junagadh District of Gujarat, India.

The Girnar mountain ranges are considered to be sacred. It is an important pilgrimage site for both Jains and Hindus, who gather here during the Girnar Parikrama festival. Girnar is one of the five major 'tirthas' attributed to the 'panchkalyanakas' of various 'Jain tirthankaras'

This mountain was considered holy to Buddhists.

Mount Girnar is a major igneous plutonic complex which intruded into the basalts towards the close of the Deccan Trap period. The rock types identified in this complex are gabbros (tholeiitic and alkalic), diorites, lamprophyres, alkali-syenites and rhyolites. The parent gabbroic magma is shown to have given rise in sequence to diorites, lamprophyres and alkali-syenites. The rhyolite, though earlier considered a product of differentiation, is now believed to be an independent magma without any genetic link with the gabbro and its variants.

The mountain Girnar is older than the Himalayas and the Jain temples upon it are amongst the most ancient in the country; it is the Nirvan bhumi of 22nd Tirthankara Neminath. It is 3666 feet high, and is one of the most remarkable mountains in India. From the city of Junagarh, which is at an altitude of barely 351 feet only the top of Mount Girnar can be seen, as it has in front of it lower hills, of which Jogniya, or Laso Pawadi, 2527 feet; Lakhshman Tekri, Bensla, 2290 feet high; and Datar, 2779 feet high, are the principals.

Fourteen of Ashoka's Major Rock Edicts, dating to circa 250 BCE, are inscribed on a large boulder that is housed in a small building located outside the town of Junagadh on Saurashtra peninsula in the state of Gujarat, India. It is located on Girnar Taleti road, at about 2 km (1.2 mi) far from Uperkot Fort easterly, some 2 km before Girnar Taleti. An uneven rock, with a circumference of seven meters and a height of ten meters, bears inscriptions etched with an iron pen in Brahmi script in a language similar to Pali and date back to 250 BCE, thus marking the beginning of written history of Junagadh.

On the same rock there are inscriptions in Sanskrit added around 150 CE by Mahakshatrap Rudradaman I, the Saka (Scythian) ruler of Malwa, a member of the Western Satraps dynasty (see Junagadh rock inscription of Rudradaman). The edict also narrates the story of Sudarshan Lake which was built or renovated by Rudradaman I, and the heavy rain and storm due to which it had broken. 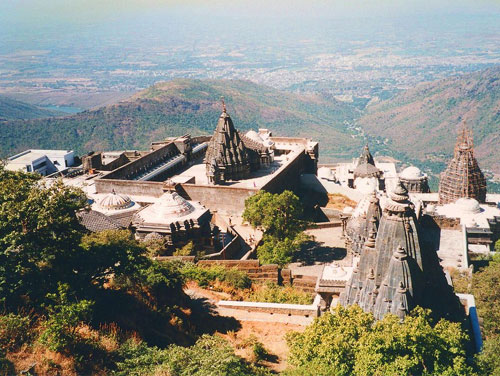 The group temples of Jainism are situated on the Mount Girnar situated near Junagadh in Junagadh district, Gujarat, India. There temples are sacred to the Digambara and the Svetambara branches of Jainism. The temple complex is dedicated to Jainism which is one of the oldest forms of religions existing in the world. The grand temple complex houses several shrines of Jain Tirthankaras with spacious passages, porches and halls atop the Mount Girnar. Devotees who cannot climb up the hills can opt for a palkhi (palanquin) which is readily available from the base of the mountain. 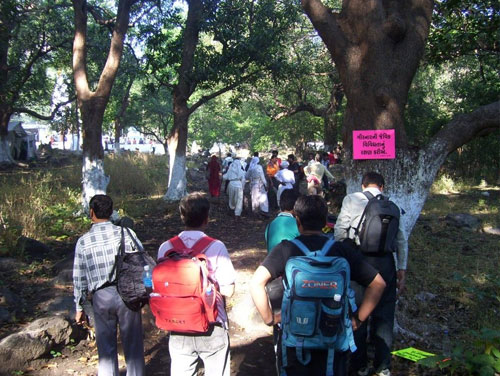 Girnar Parikrama is a massive annual event for Hindus. More than ten lakh pilgrims come to Girnar to carry out the procession. The procession of sadhus and pilgrims begins and ends, at the Bhavanat Temple. This festival takes place on the 11th day of the Hindu calendar month of Kartik. This procession is the backbone of the economy of Junagarh. The importance of GIRNAR PARIKRAMA from the religious point of view is much more. People from all over INDIA come to undertake this tough route, even without bothering about the harsh cold of forest. Here are the individual distances of places located on the app. 36 KM. long parikrama route: ‘Bhavnath’ to ‘Zina Bava Ni Madhi’ = 12 Kms. ‘Zina Bava Ni Madhi’ to ‘Malvela’ = 8 Kms ‘Malvela’ to ‘Bordevi’ = 8 Kms. ‘Bordevi’ to ‘Bhavnath’ = 8 Kms.