The Sun Temple is a Hindu temple dedicated to the solar deity Surya located at Modhera village of Mehsana district, Gujarat, India. It is situated on the bank of the river Pushpavati. It was built after 1026-27 CE during the reign of Bhima I of the Chaulukya dynasty. No worship is offered now and is protected monument maintained by Archaeological Survey of India. The temple complex has three components: Gudhamandapa, the shrine hall; Sabhamandapa, the assembly hall and Kunda, the reservoir. The halls have intricately carved exterior and pillars. The reservoir has steps to reach bottom and numerous small shrines.

As you relax and soothe your nerves, become one with nature and open your mind to the poetry in stone, dedicated to the sun god, living glimpses of the era far elapsed emerge out of the intricacies of narrative sculptures . The remains of the Sun Temples at Modhera are relics of times gone by when reverence of the natural elements fire, air, earth, water and sky were at their peak sharing space with myriad manifestations of Vedic gods. The ancient philosophy venerating natural elements and its association with humans was considered the prime force and energy of the life cycle. A walk around the serene temple campus makes you aware of the positively strong aura of energy which the place radiates and through it brings one closer to the environs. 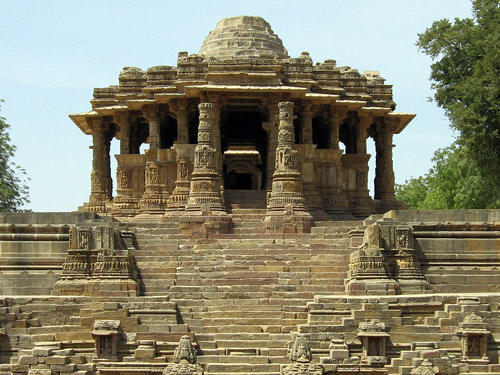 The shrine proper of the Sun Temple was built during the reign of Bhima I of Chaulukya dynasty. Earlier, during 1024-25, Mahmud of Ghazni had invaded Bhima's kingdom, and a force of around 20,000 soldiers had unsuccessfully tried to check his advance at Modhera. Historian A. K. Majumdar theorizes that the Sun Temple might have been built to commemorate this defence. On a block in western wall of cella, there is an inscription "Vikram Samvat 1083" upside down carelessly incised in Devnagari script which correspond to 1026-1027 CE. No other date is found. As the inscription is upside down, it evidences the destruction and reconstruction of the cella. Due to position of the inscription, it is not firmly considered as the date of construction. On the stylistic ground, it is known that the kunda with its corner shrines was built earlier in the beginning of the 11th century. The inscription is rather considered as the date of destruction by Ghazni instead of the construction. Soon after Bhima had returned to the power. So the temple proper, the miniature and the niche shrines in the tank was built shortly after 1026 CE. The dancing hall was added much later in the third quarter of the 12th century along with the gateways, the porch of the temple proper and the doorframes of the temple and the cella during the reign of the Karna.

The temple is built on 23.6° latitude (approximately near Tropic of Cancer). The place was later known as Sita ni Chauri and Ramkund locally. No worship is offered here now. The temple is Monument of National Importance and is maintained by Archeological Survey of India. 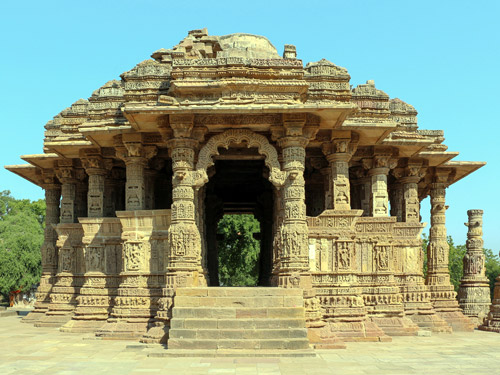 The temple complex is built in Maru-Gurjara style (Chaulukya style). The temple complex has three axially aligned components; the shrine proper (garbhagriha) in a hall (gudhamandapa), the outer or assembly hall (sabhamandapa or rangamandapa) and a sacred reservoir (kunda).

The sabhamandapa is not in continuation with gudhamandapa but is placed little away as a separate structure. Both are built on paved platform. Their roofs have collapsed long ago leaving behind few lower-most courses. Both roofs are 15' 9" in diameter but are constructed differently. The platform or plinth is inverted lotus shaped.

The Gudhamandapa measures 51 feet 9 inches by 25 feet 8 inches. It is almost equally divided into Gudhamandapa, the hall and garbhgriha, the shrine proper. Both are rectangular in plan with one projection on each of the smaller sides and two projections on each of the longer sides. This projections on the smaller sides form the entrance and the back of shrine. The three projections of outer wall of Gudhamandapa had windows on each side and the east projection had the doorway. These windows had perforated stone screens; the northern is in ruins and the southern is missing. Pradakshinamarga is formed by the passage between the walls of garbhgriha and the outer walls of gudhamandapa. The roof of passage has stones slabs carved with rosettes. The Shikhara of the it no longer exists.

The Garbhagriha, the shrine proper or sanctum sanctorum is square measuring 11 feet from inside.

The shrine had two cells; a cell below the level of upper cell. The floor of upper cell is now fallen which once housed the image of deity. The seat of image is now in pit. The lower cell was probably used for storage.

The walls inside shrine is plain and outer wall is decorated. The doorway has carved figures of seated Surya in panels surrounded by dancers and amorous couples. All figures are mutilated and the images on the door-lintel is completely destroyed.

The sanctum sanctorum is designed in a way that the first rays of rising sun lit up the image of Surya during solar equinox days and on summer solstice day, the sun shines directly above the temple at noon casting no shadow.

The outer walls of shrine is highly decorated. The base and walls of the shrine and hall are divided into several stretches with unique carvings. the pitha or adhisthana, base has the two square members called bhat followed by a cymarecta carving (lower part convex and upper part concave). It is followed by padma or padmaka, the moulding in form of inverted lotus. The next is antarita, a fillet or an astragal with a sharp edge between two recesses. Above this is patta having thin moulding called chhaja at its lower edge. The next is another chhaja separated by neck, alinga. The next broad band, patti, is gajathara carved with elephants. The following band narathara has figures of men in different attitudes.

Mandovara, the wall mouldings starts with kumbha, a pitcher. It has a broad undecorated band at lower part while middle part is decorated with oval discs. It is followed by kalasha, a pitcher. The next is broad band with chaitya-windows called kevala followed by similar called manchi. These two bands are separated by a deep band. There is a thin fillet above which the major paneled face of wall called jangha exist. This panels are decorated with figures of gods but the figures of Surya are placed prominently than others as the temple is dedicated to him. Other panels are decorated with dancers and other figures.

The figures of Surya are prominently carved on three niches of shrine proper as well as on the each side of three windows in the outer wall of Gudhamandapa. The figures of Surya is in standing position with two arms holding lotuses and driven by seven horses. It has some Persian influences. The walls have 12 niches showing the different aspects of Surya in each month. Other figures include eight Dikpals, Vishwakarma, Varuna, Agni, Ganesha, Saraswati.

Every figure in panel has a small cornice over it surmounted with triangular pediment consisting of chaitya-window which is called udgam. The next projecting band with chaitya-window and kirtimukha is called malakval. The top most is the major cornice called chhajli.

This is followed by shikhara which no longer exist. The Vimana had horizontal geometrical and figurative bands which rising to create the Mount Meru-like shikhara. The central spire had Urushringa, the miniature shrines. It is judged by the shrines on the steps of Kunda.

The Mandapa, a hall was roofed by a dome which probably rose in concentric manner. It is supported by eight principal pillars below arranged in an octagon, four pillars in front of shrine proper and two each in the recesses of windows and door.

Sabhamandapa or Rangamandapa, the assembly hall or dancing hall is parallelogram in plan with rows of pillars opening entrance on each side diagonally. The extensively carved exterior has series of recessed corners giving impression of the star like plan of it. There are 52 intricately carved pillars. Madhusudan Dhaky has suggested that the sabhamandapa may has been later addition based on style and construction.

The pitha is almost similar to the Gudhamandapa but smaller as two courses of fillets are omitted. The padma is carved richly here with floral ornamentation.

The roof was in shape of stepped pyramid but it no longer exists. Inside, the walnut-shaped ceiling rises in tiers which has numerous floral girdles. It is 23 feet high. It is supported by pillars arranged in an octagon. These pillars have stilts which supports the lintels. Torana or the decorated cusped arches arise from the lower brackets of the pillars and touch the lintels in middle. There are two types; semicircular and triangular. The semicircular arches has cusped arches with tips while triangular arches has round apex and wavy sides. Both types has broad band decorated with figures and tips which are now defaced and damaged. The lower brackets has makara which gives the name of makara-torana while decoration gives name of chitra-torana.

The pillars of Sabhamandapa and Gudhamandapa are of two types; short and tall. The short pillars rests on walls and supports the roof. The tall pillars rise from the floor.

The shaft is square in shape till half of its height followed by vase and then followed by octagonal shaft. It is surmounted by a capital and a bracket. The square part has floral design in circle on each side of faces. The vase is decorated similarly on its corners. The octagonal part have four bands; the top most has kirtimukha. The capital has three annulets.

The next is beginning of shaft. It is first decorated with standing figures, mostly dancers, on all eight faces enclosed in ringed pilasters. The next band with scenes of men and beasts is separated from it by round pillow-like band. It is followed by still smaller band with sixteen standing human figures separated by small annultet below. The next is band of leaves. Then the shaft becomes circular and had three or four bands having row of male warriors, lozenges, circles and kirtimukha at last. The kirtimukhas are separated by chain and bell ornamentation.

The panels on the Gudhamandapa is decorated with Surya centrally which indicates that the temple is dedicated to Surya. These images wears peculiar West Asian (Persian) boots and belt. The other corners and niches are decorated with figures of Shiva and Vishnu in various forms, Brahma, N?ga and goddesses. The depicted scenes on small flat ceilings and lintels of sabhamandapa are from epics like Ramayana.

There was a kirti-torana, the triumphant arch, in front of sabhamandapa. The pediment and torana no longer exists but two pillars remains. The moulding and decoration is similar to that of walls of sabhamandapa and pillars. There were two more kirti-torana on each side of the kunda of which only one exists without upper part.