Located on the route between Dwarka city and Beyt Dwarka Island on the coast of Saurashtra in Gujarat is this important Lord Shiva Temple. It is enshrined by one of the 12 swayambhu (self-existent) jyothirlingas in the world, in an underground sanctum. A 25 m tall statue of a sitting Lord Shiva and a large garden with a pond are major attractions of this rather serene place. Some archaeological excavations claim five earlier cities at the site.

Nageshwar was believed to be known as Darukavana, which is an ancient epic name of a forest in India. Below are two well-known legends attached to this mystical temple:

According to the first legend, Balakhilyas, a group of dwarf sages worshipped Lord Shiva in Darukavana for long a time. To test their devotion and patience, Shiva came to them as a nude ascetic wearing only nagas [serpants] on his body. Wives of sages got attracted to the saint and went after him, leaving their husbands behind. Sages got very disturbed and outraged by this.They lost their patience and cursed the ascetic to loose his linga [one of the limited meanings is Phallus, but it has has a deeper theistic symbolism]. Shiva linga fell on the earth and the whole world trembled. Lord Brahma and Lord Vishnu came to Lord Shiva, requesting him to save the earth from destruction and take back his linga. Shiva consoled them and took back his linga.

Another story goes hundreds of years ago in the Shiv Purana, about a demon couple named Daruka and Daruki, after whom was named Daruka Van (forest), later known as Dwarka. Daruki was a devotee of Parvati and was blessed by her. He misused her blessings and tryranized the local folks. One day he captured a Shiva devotee called Supriya who was one of the pilgrims on a boat. The demon imprisoned her along with several others at his capital Darukavana. Supriya advised all prisoners to recite the Shiva mantra - Aum Namaha Shivayay to protect them. When Daruka came to know about this he ran to kill Supriya. Instantly Lord Shiva appeared in the form of a jyothirlinga from the earth. He could not kill the demon who was blessed by his own wife, Parvati, but he assured Supriya that he would protect him in the form of a linga. The linga here thus came to be revered. 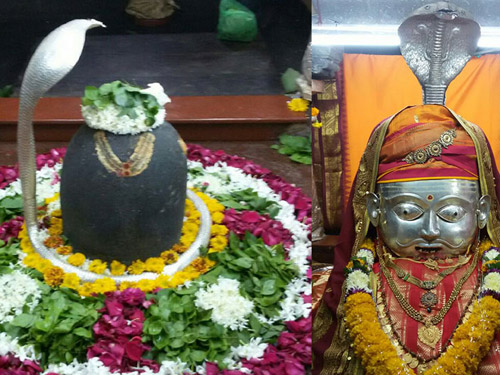 The Shiva Purana says Nageshvara Jyotirlinga is in 'the Darukavana', which is an ancient name of a forest in India. 'Darukavana' finds mention in Indian epics, such as Kamyakavana, Dvaitavana, Dandakavana.

A narrative in the Shiva Purana about the Nageshvara Jyotirlinga tells of a demon named Daaruka, who attacked a Shiva devotee named Supriya and imprisoned him along with many others in his city of Darukavana, a city under the sea inhabited by seasnakes and demons. At the urgent exhortations of Supriya, the prisoners started to chant the holy mantra of Shiva and immediately thereafter the Lord Shiva appeared and the demon was vanquished, later residing there in the form of a Jyotirlinga. The demon had a wife, a demoness named Daaruki who worshipped Mata Parvati. As a result of her penance and devotion, Mata Parvati enabled her to master the forest where she performed her devotions, and renamed the forest 'Darukavana' in her honour. Wherever Daaruki went the forest followed her. In order to save the demons of Darukavana from the punishment of the gods, Daaruka summoned up the power Parvati had given her. She then moved the entire forest into the sea where they continued their campaign against the hermits, kidnapping people and keeping them confined in their new lair under the sea, which was how that great Shiva devotee, Supriya, had wound up there.

The arrival of Supriya caused a revolution. He set up a lingam and made the prisoners recite the mantra Om Namaha Shivay in honour of Shiva while he prayed to the lingam. The demons' response to the chanting was to attempt to kill Supriya, though they were thwarted when Shiva appeared and handed him a divine weapon that saved his life. Daaruki and the demons were defeated and Parvati saved the remaining demons. The lingam that Supriya had set up was called Nagesha; it is the tenth lingam. Shiva once again assumed the form of a Jyotirlinga with the name Nageshwar, while the Goddess Parvati was known as Nageshwari. The Lord Shiva then announced that he would show the correct path to those who would worship him. 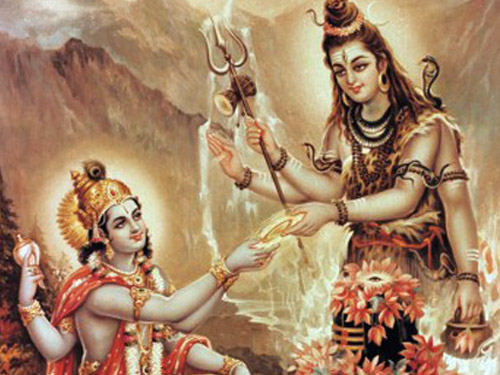 The name Darukavana, is derived from 'daruvana' (forest of deodar trees), is thought to exist in Almora. Deodar (daru vriksha) is found abundantly only in the western Himalayas, not in peninsular India. Deodar trees have been associated with Lord Shiva in ancient Hindu texts. Hindu sages used to reside and perform meditation in deodar forests to please Lord Shiva. Also, according to the ancient treatise Prasadmandanam,

Because of this the 'Jageswara' temple in Almora, Uttarakhand is commonly identified as Nageshvara Jyotirlinga.

The written name of Darukavana could be misread as 'Dwarakavana' which would point to the Nageswara temple at Dwaraka. However no forest is in this part of Dwaraka that finds mention in any of the Indian epics. The narratives of Shri Krishna, mention Somanatha and the adjoining Prabhasa tirtha, but not Nageswara or Darukavana in Dwaraka.

Darukavana might exist next to the Vindhya Mountains. It is south-southwest of the Vindhyas extending to the sea in the west. In the Dvadasha Jyotirlinga Stotra Shankaracharya praised this Jyotirlinga as Naganath:

This could be taken to mean that it is located in the south ['yamye'] at the town of 'Sadanga', which was the ancient name of Aundh in Maharashtra, south of the Jageswara shrine in Uttarakhand and west of Dwaraka Nageshvara.