The Somnath temple located in Prabhas Patan near Veraval in Saurashtra on the western coast of Gujarat, is believed to be the first among the twelve jyotirlinga shrines of Shiva. It is an important pilgrimage and tourist spot of Gujarat. Reconstructed several times in the past after repeated destruction by several Muslim invaders and Portuguese, the present temple was reconstructed in Chaulukya style of Hindu temple architecture and completed in May 1951. The reconstruction was completed by Vallabhbhai Patel.

The temple is considered sacred due to the various legends connected to it. Somnath means "Lord of the Soma", an epithet of Shiva.

The Somnath temple is known as "the Shrine Eternal", following a book of K. M. Munshi by this title and his narration of the temple's destruction and reconstruction many times in history.

According to tradition, the Shivalinga in Somnath is one of the 12 jyotirlingas in India, where Shiva is believed to have appeared as a fiery column of light. The jyotirlingas are taken as the supreme, undivided reality out of which Shiva partly appears.

Each of the 12 jyotirlinga sites take the name of a different manifestation of Shiva. At all these sites, the primary image is a lingam representing the beginning-less and endless stambha (pillar), symbolizing the infinite nature of Shiva. In addition to the one at Somnath, the others are at Varanasi, Rameswaram, Dwarka, etc.

The site of Somnath has been a pilgrimage site from ancient times on account of being a Triveni sangam (the confluence of three rivers: Kapila, Hiran and Sarasvati). Soma, the Moon god, is believed to have lost his lustre due to a curse, and he bathed in the Sarasvati River at this site to regain it. The result is the waxing and waning of the moon, no doubt an allusion to the waxing and waning of the tides at this sea shore location. The name of the town Prabhas, meaning lustre, as well as the alternative names Someshvar and Somnath ("The lord of the moon" or "the moon god") arise from this tradition. 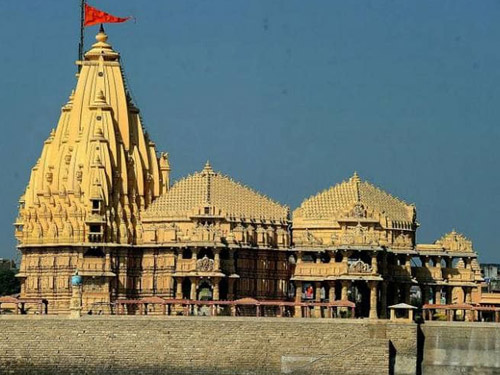 According to popular tradition documented by J. Gordon Melton, the first Shiva temple at Somnath is believed to have been built at some unknown time in the past. The second temple is said to have been built at the same site by the "Yadava kings" of Vallabhi around 649 CE. In 725 CE, Al-Junayd, the Arab governor of Sindh is said to have destroyed the second temple as part of his invasions of Gujarat and Rajasthan. The Gurjara-Pratihara king Nagabhata II is said to have constructed the third temple in 815 CE, a large structure of red sandstone.

However, there is no historical record of an attack on Somnath by Al-Junayd. Nagabhata II is known to have visited tirthas in Saurashtra, including Someshvara (the Lord of the Moon), which may or may not be a reference to a Siva temple because the town itself was known by that name. The Chaulukya (Solanki) king Mularaja possibly built the first temple at the site sometime before 997 CE, even though some historians believe that he may have renovated a smaller earlier temple. 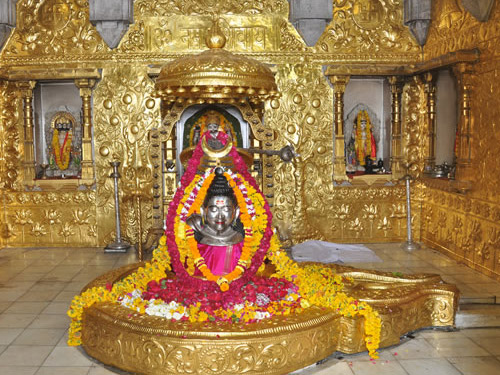 In 1024, during the reign of Bhima I, the prominent Turkic ruler Mahmud of Ghazni raided Gujarat, plundering the Somnath temple and breaking its jyotirlinga despite pleas by Brahmins not to break it. He took away a booty of 20 million dinars. Historians expect the damage to the temple by Mahmud to have been minimal because there are records of pilgrimages to the temple in 1038, which make no mention of any damage to the temple. However, powerful legends with intricate detail developed in the Turko-Persian literature regarding Mahmud's raid, which "electrified" the Muslim world according to scholar Meenakshi Jain. They later boasted that Mahmud had killed 50,000 devotees. The devotees had tried to defend the temple from being vandalised and looted.

The temple at the time of Mahmud's attack appears to have been a wooden structure, which is said to have decayed in time (kalajirnam). Kumarapala (r. 1143–72) rebuilt it in "excellent stone and studded it with jewels," according to an inscription in 1169. During its 1299 invasion of Gujarat, Alauddin Khalji's army, led by Ulugh Khan, defeated the Vaghela king Karna, and sacked the Somnath temple. Legends in the later texts Kanhadade Prabandha (15th century) and Khyat (17th century) state that the Jalore ruler Kanhadadeva later recovered the Somnath idol and freed the Hindu prisoners, after an attack on the Delhi army near Jalore. However, other sources state that the idol was taken to Delhi, where it was thrown to be trampled under the feet of Muslims. These sources include the contemporary and near-contemporary texts including Amir Khusrau's Khazainul-Futuh, Ziauddin Barani's Tarikh-i-Firuz Shahi and Jinaprabha Suri's Vividha-tirtha-kalpa. It is possible that the story of Kanhadadeva's rescue of the Somnath idol is a fabrication by the later writers. Alternatively, it is possible that the Khalji army was taking multiple idols to Delhi, and Kanhadadeva's army retrieved one of them.

The temple was rebuilt by Mahipala I, the Chudasama king of Saurashtra in 1308 and the lingam was installed by his son Khengara sometime between 1331 and 1351. As late as the 14th century, Gujarati Muslim pilgrims were noted by Amir Khusrow to stop at that temple to pay their respects before departing for the Hajj pilgrimage.

In 1395, the temple was destroyed for the third time by Zafar Khan, the last governor of Gujarat under the Delhi Sultanate and later founder of Gujarat Sultanate. In 1451, it was desecrated by Mahmud Begada, the Sultan of Gujarat.

In 1546, the Portuguese, based in Goa, attacked ports and towns in Gujarat including Somnath and destroyed several temples and mosques.

By 1665, the temple, one of many, was ordered to be destroyed by Mughal emperor Aurangzeb. In 1702, he ordered that if Hindus revived worship there, it should be demolished completely.

"Proclamation of the Gates" incident during the Maratha period 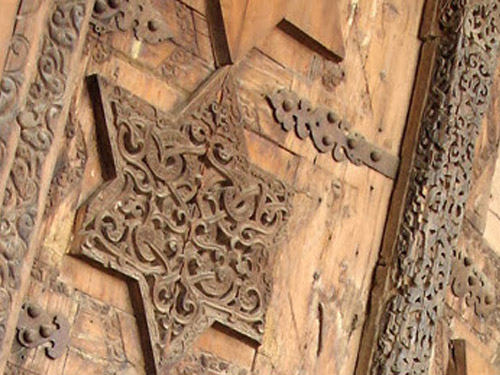 In 1782-83, Maratha king Mahadaji Shinde, victoriously brought back three silver gates from Lahore after defeating Mahmud Shah Abdati, to Somnath. After refusal from priests of Gujarat and the then ruler Gaekwad to put them back on Somnath temple, these silver gates were placed in the temples of Ujjain. Today they can be seen in two temples of India, Mahakaleshwar Jyotirlinga and Gopal Mandir of Ujjain.

In 1842, Edward Law, 1st Earl of Ellenborough issued his Proclamation of the Gates, in which he ordered the British army in Afghanistan to return via Ghazni and bring back to India the sandalwood gates from the tomb of Mahmud of Ghazni in Ghazni, Afghanistan. These were believed to have been taken by Mahmud from Somnath. Under Ellenborough's instruction, General William Nott removed the gates in September 1842. A whole sepoy regiment, the 6th Jat Light Infantry, was detailed to carry the gates back to India in triumph. However, on arrival, they were found not to be of Gujarati or Indian design, and not of Sandalwood, but of Deodar wood (native to Ghazni) and therefore not authentic to Somnath. They were placed in the arsenal store-room of the Agra Fort where they still lie to the present day. There was a debate in the House of Commons in London in 1843 on the question of the gates of the temple and Ellenbourough's role in the affair. After much crossfire between the British Government and the opposition, all of the facts as we know them were laid out.

In the 19th century novel The Moonstone by Wilkie Collins, the diamond of the title is presumed to have been stolen from the temple at Somnath and, according to the historian Romila Thapar, reflects the interest aroused in Britain by the gates.

Before independence, Prabhas Patan was part of the Junagadh State, whose ruler had acceded to Pakistan in 1947. After India refused to accept his decision, the state was made a part of India and Deputy Prime Minister Patel came to Junagadh on 12 November 1947 to direct the stabilization of the state by the Indian Army and at the same time ordered the reconstruction of the Somnath temple.

When Patel, K. M. Munshi and other leaders of the Congress went to Mahatma Gandhi with their proposal to reconstruct the Somnath temple, Gandhi blessed the move, but suggested that the funds for the construction should be collected from the public and the temple should not be funded by the state. He expressed that he was proud to associate himself to the project of renovation of the temple. However, soon both Gandhi and Sardar Patel died and the task of reconstruction of the temple continued under Munshi, who was the Minister for Food and Civil Supplies, Government of India headed by Prime Minister Jawaharlal Nehru.

The ruins were pulled down in October 1950 and the mosque present at that site was shifted few kilometres away by using construction vehicles. In May 1951, Rajendra Prasad, the first President of the Republic of India, invited by K M Munshi, performed the installation ceremony for the temple. The President said in his address, "It is my view that the reconstruction of the Somnath Temple will be complete on that day when not only a magnificent edifice will arise on this foundation, but the mansion of India's prosperity will be really that prosperity of which the ancient temple of Somnath was a symbol.". He added "The Somnath temple signifies that the power of reconstruction is always greater than the power of destruction."